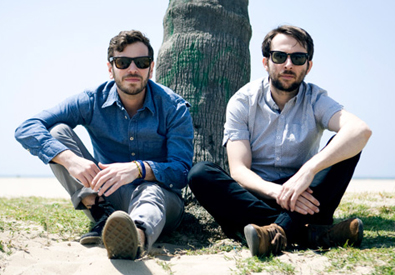 8:00pm Show - 6:30pm Doors open and dinner service begins in the Theater {All Ages}
$16
Purchase tickets online or by calling our Box Office at 206.838.4333.
Suites are also available for private parties and special events. Call our Private Dining department at 206.838.4312 to reserve a private suite for the show.
STG Presents
Tuesday / June 21, 2016
Keith Goodwin is a singer / songwriter / multi-instrumentalist who owns a cat named King and a dog named Jet.  He’s a middle child with two children of his own.  Keith writes at the very least an idea for a song each day and is known for unique stage dancing.
Dan Schwartz is a music-obsessed Sagittarius with a bike riding habit the size of Philadelphia.  He is also a coffee enthusiast and an avid reader who doesn't need a movie to be "good" to like it.  He enjoys a game of dominos and a shot of whiskey with friends.  Most of all, Dan is a guitar player, songwriter, and harmony singer.
Broken Into Better Shape (2015)
Broken Into Better Shape finds Good Old War pushing their musical boundaries to the limit.   Road-weary from two years at sea, the trio set out to write an album full of songs that were not limited to sounding perfect in a live experience.  They bunkered down in Goodwin’s toddler-toy-filled house and struggled for half a year to find what they were looking for.  Around this time, drummer Tim Arnold left the band for Atlanta, where his fiancé was pregnant with their first child.  Arnold’s DNA remains in the band and his fingerprints are still present as a writer on some of the tracks on the record.
With half of the album’s songs now written, Goodwin and Schwartz began experimenting with other writers and producers.  In New York City, they dreamed up the ultra-inspirational “Fly Away” with writer Emile Haynie (fun., Bruno Mars).  A trip to Los Angeles found them improbably paired in a writing session with Zimbabwe-born urban producer T-Collar, where a hook was crafted that the band were eager to take to the studio.  It would become their first single, “Tell Me What You Want From Me.”
Broken Into Better Shape became the record that it is in Nashville, where the band wrote and rounded out songs with producer Jason Lehning (Alison Krause & Union Station, Mat Kearney, Dolly Parton) and with the aid of a terrific group of musicians and writers.  Whereas much of the band’s earlier work had been written individually, this album would end up being a grand collaboration.
The result is the band’s proudest moment, an album of lush, well-crafted songs with no filler, ten songs whittled down from a pool of over forty.
April 2015 will find the band touring for the first time in three years, reunited with drummer Tim Arnold, who’s traded changing diapers for continuing to be a touring member of the band.
http://www.goodoldwar.com/
http://emptyhousesband.com/